Giving Respect Where It Is Due

By now, we’ve all sponged up round after round of commentary on President Trump’s purported remark that Haiti and various African countries are “s—holes” whose people should not be let into the United States. Some of the rounds have involved attempts to deny or obfuscate the statement. The disclaimer would be easier to believe if this were not exactly the sort of thing he often likes to say.

I have been misunderstood on the subject of Haiti myself. In 2013, I was there with a medical mission group running a mobile clinic in greater Port-au-Prince. Each morning before the doors opened, the patients for the day would have gathered, and we (local medical staff supplemented by American volunteers) would introduce ourselves. On this balmy morning in the fishing village of Luly, in halting French, I thanked them for welcoming me to their beautiful country. This was met with derisive laughter, my words apparently interpreted as sarcasm. I felt terrible that a heartfelt courtesy was taken as an insult and that I lacked the language and other skills to clear it up. 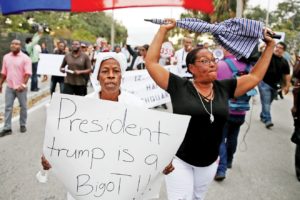 Head In Ass Supporter Comments on June 28, 2018 in No Category.
Add Comment
0 Comments