WASHINGTON — A federal judge is being asked to temporarily block construction related to the Obama Presidential Center in Jackson Park by park preservationists going to court in the wake of a Chicago Sun-Times report revealing that trees were cut down at the park despite a lack of final government approvals.

The motion was filed as part of an existing lawsuit against the city of Chicago and Chicago Park District.

The lawsuit, filed on May 14, aims to prevent the use of Jackson Park for the Obama Center complex. The new motion will be the subject of a hearing on Aug. 14. 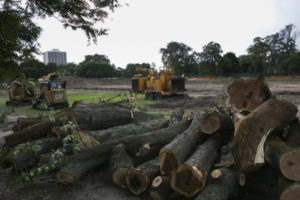